“It wasn’t a pretty game, we raced ahead but clearly had other things on our minds as the game became close, we raised our game and won easily in the end. Bigger games and challenges await.” 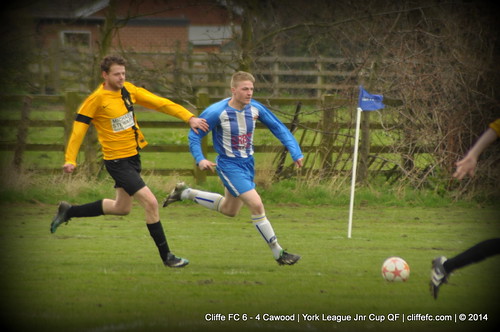 Cliffe raced into the lead straight from kick-off, Chris Jackson bursting past the Cawood back four to make it 1-0 after 37 seconds. The majority of the tie’s goals came in the first-half, eight in-fact. Jack Healey doubled Cliffe’s lead from close range, 2-0. Cawood halved the deficit when Healey fouled Jim Darlison in the box, Darren Davis scored the penalty-kick, 2-1. Jackson scored his second, neatly passing the ball past the ‘keeper onto the foot of the post into the back of the net, 3-1. Jackson then completed his hat-trick near the 30 minute mark, poaching a close range effort after a headed knock-down, 4-1. Dave Laverack made a great save from a deflected Cawood free-kick, somehow flicking the ball up with one foot and volleying it over the bar with the other – all whilst laid on the floor. Laverack couldn’t do nothing about Davis’ next goal with a shot from the right wing that arced it’s way over everyone into the far-post side netting, 4-2. Dan Smith made it 4-3 and gave Cawood a glimmer of hope before Cliffe scored with their next attack, Andy Kirkham breaking down the right wing to power his shot past the ‘keeper to make the half-time score 5-3, HT.

For all the goals in the first half, the second wasn’t as much of a goal-fest with only two goals being scored in the second period. Andy Addison made it 6-3 to kill the tie off, but a Craig Allen free-kick found it’s into the net via a combination of Laverack and Davis, Davis claiming a hat-trick for Cawood, 6-4 the final score, FT. Cliffe FC will face Fulford away in the Semi-Final as Cliffe continue to fight on four fronts, the Semi-Final will be played on Saturday 19th April.