“A tricky place to go on a Monday night, a partisan touchline, a physical opponent and the pressure of needing a result. All of these challenges were met by the players in a very good display. Shows what’s possible.” 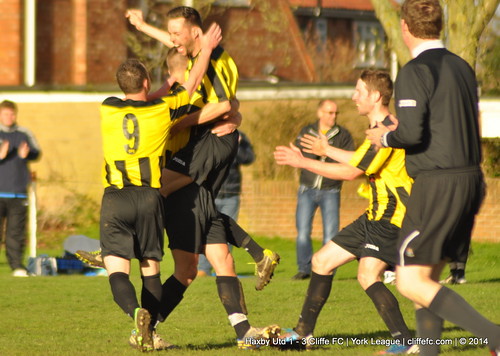 Cliffe continued from Saturday’s Cup win against Cawood in a super-busy seven days for the Oxen Lane club and travelled to Haxby United on a Monday evening.
Cliffe began the brighter of the two sides and Si Houlder nearly opened scoring with a delightful effort that saw his lob bounce off and over the crossbar. Cliffe did take the lead in the 14th minute when a Houlder knock-down was volley superbly past the ‘keeper to by Reuben Pearse, his first league goal for over a year, to make it 1-0 to the away side. Cliffe doubled their lead before half-time, Kevin Taylor’s cross put past the ‘keeper via a diving header from Ian Beckram, Beckram’s first Cliffe FC headed goal after showing great desire to get in front of the defender, 0-2 HT.

Houlder extended Cliffe’s lead early in the second-half, beating the offside trap and sending the ‘keeper the wrong way with his one-on-one effort – a deserved goal for Houlder’s efforts, 3-0. Pearse had a shot saved, which Tom Hogg had the ball in the net from the resulting corner – only to be disallowed for a prior foul. Ryan Sedman flashed a shot past the post after a surging run and Ben Rawson came close with almost his first touch from the bench. Cliffe’s middle three of Beckram, Pearse and Tom Robinson all impressed and a cameo from Nathan Horner was good to see – a thoroughly decent team performance through-out. Haxby snatched a late consolation goal in the last 7 or so minutes, but Cliffe collected all the points, 1-3 FT.