Cliffe FC May bank holiday begins with Title chasing Pocklington Town handing out a 5-0 defeat to first team, Cliffe FC Sundays however edge out another goal heavy match finishing on the right side of a 4-3 scoreline – a Tom Hogg hat-trick the highlight, Nath Parker snatching the winner.

Cliffe, having won 2-0 on Wednesday night against Tockwith, made a number of changes to the squad due to work and other commitments for Saturdays game, and it was Phil Newstead who would wear the armband on the day.
Cliffe having kept two clean sheets previous saw that run ended early in the first half, failure to clear the ball saw Pocklington score from close range to make it 0-1, Pocklington travelled to Selby Olympia (the venue for Saturday’s game once more) knowing a win would all but confirm a top 2 place and would need Malton and Norton to drop points elsewhere to hand the title to Pocklington.
Two own-goals would see Pock lead 3-0 at the half-time break, not the half Cliffe wanted to have, HT. 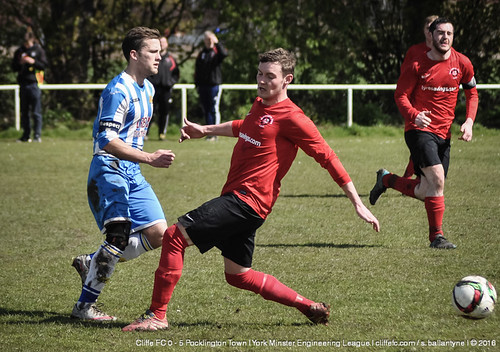 Second half saw a shape change for Cliffe and an improvement in performance and the scoreline wasn’t telling of how the second half played, although Pock scored in the opening 60 seconds of the half to make it 4-0 so maybe the away side were guilty of letting their foot off the gas as a end-of-season feeling began to develop. Cliffe did show glimpses of what they were capable of, Jamie England hitting the post, Andy Edwards seeing a long range freekick saved, and Newstead earning himself man-of-the-match in the middle of the park. Pock scored once more near the end to seal a 5-0 win FT, and thus means Cliffe will finish the season 8th (out of 11) in the Division One table.

Their last league game is next Saturday, against York St John, a warm up game of sorts for Cliffe as they look forward to next Wednesday’s League Cup semi-final against Riccall United.

Cliffe FC Sunday travelled to Marcia Bishopthorpe, a seemingly now rare one 90 minute game instead of a double header. Cliffe had an early lead when a corner which wasn’t clear was swung in once more for Tom Hogg to redirect the ball into the back of the net for 0-1. A penalty from Marcia saw them draw level shortly afterwards, a lunging jump challenge from Matt Birch punished, penalty converted for 1-1. A superb Kieran Dinsdale cross was then converted back post by Hogg to bring Cliffe back in front before half-time, Hogg hitting double figures for the season, HT. 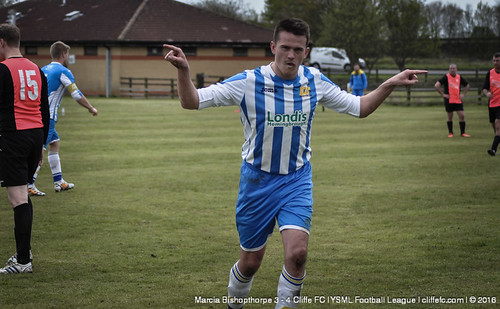 After half-time Cliffe wanted to kick on and seal the game, but once more things wouldn’t go as simple as that with the performance level not up to standard which saw Marcia first level the game up at 2-2 and them 90 seconds later the home side were in front, 3-2! A motivated Hogg would bring Cliffe level once more, breaking past his marker and hammering a piledriver of the shot past the ‘keeper to complete his hat-trick and make it 3-3. The final quarter hour of the game saw both teams look like scoring, but it would go the way of title chasing Cliffe, Hogg laying on Dinsdale to cross superbly to be converted by a deft header from top scorer Nathan Parker for 4-3 to the away side. Cliffe then shut up shop Diego Simone style, going to a defensive 4-5-1 as Jackson Lucitt’s men wanted to see out the final 10 minutes, no further goals but a couple of near misses for Marcia, meant that Cliffe came away with all three points, FT.

Cliffe FC Sunday’s attention now turns to next Sunday, 8th May, and the Challenge Trophy Cup Final – against NUR which is sceduled for a 1.30pm KO at Huntington.