A glorious Sunday afternoon in York was the setting for the Junior Challenge Trophy final where YSML Division Two leaders NUR would face second placed Cliffe FC Sunday. Previous meetings saw Cliffe take four points to NUR’s one. With the welcomed selection headache, Jackson Lucitt took a squad of 16 to York with hopes of bringing back the silverware.

Kick off and from the whistle there wasn’t a lot football on show, with the ball being hoofed from end to end leaving the midfield men useless to the cause. The first half in fact was not the best of displays from either team, though there were plenty of battles around the pitch. 0-0 at half time.

The emphasis was now on getting the ball down and playing to the strengths of the players in blue and white. It lasted approximately 10 minutes before the ball was being lofted from back to front and back again. Eventually, NUR got a break through and the striker took his chance, 0-1 with 22 minutes to go. Cliffe’s usual style of passing, fluid football had deserted them on the day and it seemed that nerves had perhaps crept in. As the match drew on Cliffe asked questions of the NUR keeper which he answered, well! A superb save from the NUR #1 at 0-1 that ended up being vital. With all the football being played around the NUR box, Cliffe perhaps thought they could nick a late goal, instead NUR broke on the counter and killed the game with 4 minutes remaining. It finished 0-2. Heartbreak for Cliffe FC who in the end couldn’t complete the job in their first Sunday final. Efforts now remain on the league campaign where Cliffe remain 3 points adrift of NUR with 5 games in hand to the end of the season.

Saturday was the final league fixture of the season for Cliffe FC first team, with Division 1 status confirmed for both teams and 8th place guaranteed for Cliffe. It was 1-0 at half-time, a Alex Hartley cross was headed in at the back post by Kieran Dinsdale, but Cliffe should have been ahead by more goals and were guilty of not putting the game to bed when on top. 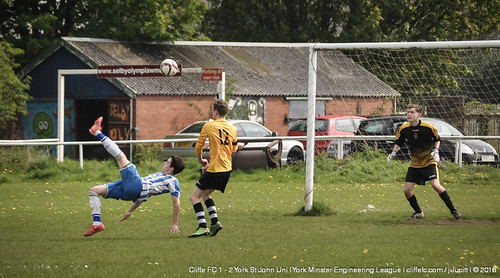 Second half saw Cliffe have lion-share of possession without scoring, and with York St John’s danger man coming more and more into the game, the next goal was vital. With 10 minutes left, St John equalised after Cliffe unable to clear their lines, 1-1. Cliffe chased the winner in the last few minutes, but were caught out and St John were able to round Cliffe ‘keeper Dave Laverack and play the ball back for a simple tap-in and complete the late comeback, 1-2 the final score. Not the result Cliffe should have come away with from the way the game played, Cliffe very comfortable at times.