Cliffe FC Sundays are promoted to YSML Division 1 with a 4-1 win at Wentworth, 1 point from four remaining games will secure the title. Cliffe FC first team are dumped out of the League Cup by a clinical Riccall United side, 6-0, Riccall progress to final.
Malcolm Bryce writes…

Cliffe FC Sundays need 1 point from four remaining league games to secure the YSML Division Two title, after a 4-1 away win at Wentworth that saw them confirm a top 2 spot and go top of table on goal-difference. 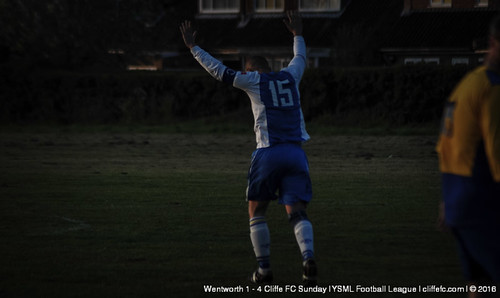 Kieran Dinsdale opened scoring with a first time left foot drive low into the bottom corner for 0-1. Cliffe should have raced into a far superior lead but this game would become more about the chances missed (by both sides) rather than the chances converted, Wentworth eventually equalising to make it 1-1 from a close range effort that was converted from a acute angle. Cliffe lead at the break, a motivated captain in the shape of Mark Bennett racing down the right wing to pull the ball back for Nathan Parker to make it 1-2 at HT. 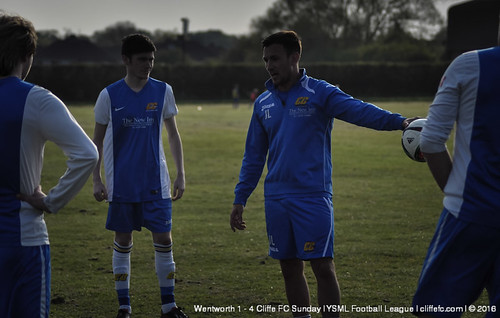 An early goal in the second half settled Cliffe’s nerves, Dinsdale setting up Parker for Cliffe’s third and Parker’s 30th goal of the season in Cliffe blue, 1-3. If all the chances in the game were converted by both sides, the scoreline may have read 7-7, the game playing in a very open end-to-end manner. Tom Hogg had a frustrating day in front of goal, and eventually moving back into defence late in the game. It took captain Bennett to seal the game beyond doubt, a low drive from outside the box finding it’s way into the net for 1-4 and confirm promotion for his side, 1-4 FT.

No game this weekend, as Cliffe FC are on their club tour in Blackpool this Saturday/Sunday. Cliffe FC Sunday can seal the title on Wednesday evening, away to Selby Olympia, where a point will win the title – but as per last season’s title win, Jackson Lucitt and his men want maximum points in their remaining games.

Riccall United will play in the YMEL Senior League Cup final next Wednesday against Dunnington, after a ruthless 6-0 display against Cliffe FC.

Cliffe knew that Riccall would have a strong side out for the tie, and it was no surprise that the task in front of them would need a decent performance and chance conversion would be vital. Riccall opened scoring from a Wayne Brook free-kick about 20 minutes in, and then a flurry of goals from Gary Collier made it 4-0 at the break – Riccall clinical in front of goal. Cliffe’s Kieran Dinsdale had a close range chance hit the underside of the bar at 1-0 and maybe that was a way back in for the away side, but not to be. 4-0 HT.

Whilst the scoreline was heavily in favour of last season’s Premier Division Champions, Cliffe competed well and matched their higher division opponents’ passing style of play, Dean Wood and Chris Thompson doing well in the midfield for the team in blue. Riccall added two goals in the second half to make the score 6-0 at the full-time whistle. Cliffe did create a number of chances, but were unable to convert them, which was their undoing in the end. Good luck to Riccall United in the final.

Cliffe FC first team showed at times what they could do against a strong Riccall team, and with some key signings in the summer could see them compete at the top of Division One next season for sure. As always, much to ponder for now permanent manager Malcolm Bryce.