Cliffe FC Sunday are crowned YSML Division Two champions, with a 4-1 win at Selby Olympia – a first-half Aidy Wood perfect hat-trick, and Lewys Williams with the goals. 24 hours later, another three points were notched for the newly crowned champions with a 3-2 win over Haxby United. 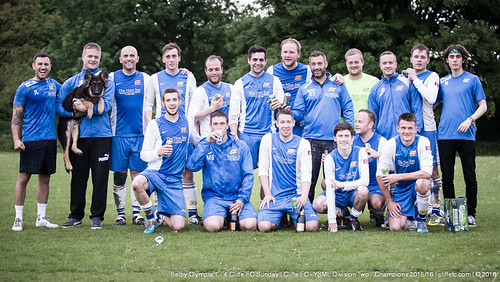 It took Cliffe 20 minutes to open scoring, the ball breaking to Kev Taylor who slipped in Aidy Wood, Wood delightfully lobbing the ‘keeper left-footed for 0-1. Taylor assisted the second goal also, a corner, headed powerfully past the ‘keeper by Wood, 0-2. Wood had his third, to complete a perfect hat-trick, breaking the offside trap to lift the ball over the onrushing ‘keeper for his third and Cliffe’s third, 0-3. Selby Olympia didn’t roll over and battled on, the half-time score reading 1-3, their skipper pouncing on a defensive lapse to race on and score, HT.

After the HT break, Cliffe wanted to go out and seal the points, and the title in the process – Lewys Williams extended Cliffe’s lead, Williams battling well on the edge of the box to win the ball off two players and then launch an arrowed shot past the ‘keeper for 1-4 – a nice goal for the Cliffe starlet. Williams had a chance to extend the lead further, after being pulled down in the area, but a rush of blood to the head saw him crash his spot kick against the bar and unable to convert the rebound. The final whistle blew and Cliffe FC Sundays were confirmed as YSML Division Two Champions 2015/16.

“Olympia away to win the league. It was the perfect game to get the lads up for it and they did not disappoint. I’d say it was probably our best footballing performance of the season. A welcomed return and a perfect hat trick for Aidy Wood set us up nicely to be crowned champions, and in a local derby. The lads have worked hard all year, every one of them, and tonight they got what they deserved! Couldn’t be happier and certainly not prouder of our achievements and the way we’ve built on last season! It’s a much bigger task next season, but the hard work and ability in the squad will make it that much more enjoyable!”

24 hours after securing the title, another three points were notched for the newly crowned champions with a 3-2 win over Haxby United. Nathan Parker, Tom Collins, and Aidy Wood with the goals.

A wet and rainy Selby Olympia ground was the venue for Thursday evening’s game, and with the dregs of beer and champagne having washed away from the night before, Haxby were the team to beat for Cliffe FC Sunday. Nathan Parker scored his 31st of the season to put Cliffe ahead, converted an Adam Wilson cross that went all the way to the back post. Another special Tom Collins free-kick made it 2-0 minutes later, and Cliffe were in control. Haxby, always up for a battle, got themselves back into the game from first a penalty and then equalised in the last minute of the first half from a long-throw for 2-2 at HT. 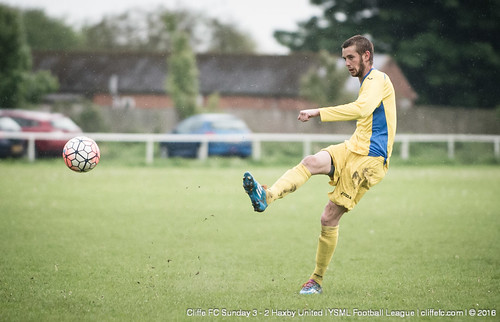 A single goal settled the game after the break, an acrobatic Parker cross was headed in by Aidy Wood for 3-2 midway in the second half to seal all the point for Cliffe, who now sit 6 points clear at the summit of the YSML Div 2 table. Cliffe FC Sunday can finish the title-winning season 12 points clear of NUR, as they close their season this Sunday, a double header against bottom-placed Beeswing – Sunday, 22nd May, 10.30am KO at Selby Olympia.

“Haxby have always made us work for the points, they turned up and today was no different. Having played last night it was always going to be hard but the lads grafted and got what they deserved! It wasn’t as pretty as I’d have liked but you don’t always get what you want. Good work lads!”