A quartet of moments around half-time saw the game swing from Cliffe leading to Thorpe dominating the scoreline. Cliffe had the lead on the five minute mark, Andy Addison dragged down in the area, Dan Collins stepped up and put the ball neatly in the bottom corner, 1-0. For the remaining 39 minutes, Cliffe frustrated Thorpe as they managed the game superbly, but Thorpe had their breakthrough on the 45th minute, a free-kick from the right headed in at the near post by former Cliffe captain, Luke Crowther for 1-1 at HT. That goal sending in Cliffe downbeat at the break, whilst lifting up the away side.

With the goal the first telling moment, and Phil Newstead – who was a certain shoo-in for man-of-the-match – had to leave at half-time was the second. Thorpe had the lead early in the second half, last season’s Sunday team talisman Aidy Wood heading in for the team in red, 1-2. Chris Coxon hit a deflected shot past Ally Harris to make it 3-1, but the game wasn’t beyond Cliffe at this point – not until the third moment going against Cliffe, Addison harshly shown a second yellow for a foul in the middle of the pitch and Cliffe now down to 10-men – which clearly affected the course of the game, followed by the forth blow – centre-back Joe Dack leaving the field due to injury. From this point Thorpe ran riot as Cliffe struggled to adjust, Wood lifting his tally to five, and for all the hard work to stop him, Nathan Parker (in the red of Thorpe) scored twice also – a few unnecessary flash points of aggression happened before the end of the match – the scoreline finishing 10-1 to certain title contenders Thorpe United. A humbling defeat, which sends Thorpe to the top of Division 1 and Cliffe to the foot of the table, with games in hand however. MOTM: Elliot Clark.

Sunday was a much closer game, which it typical when Cliffe and Marcia Bishopthorpe meet. Cliffe FC Sunday making the trip to York College.

Cliche dropouts, typical of Sunday morning football, saw Cliffe reduced to a 12-man squad but regardless the performance the spirit and attitude applied was superb.
Marcia had an early 2-goal lead, but Tom Collins reduced the deficit before the break. Scott Birch made a superb save from a penalty that would have made it 3-1 before HT – Birch diving the wrong way but able to kick the ball clear.

Cliffe worked hard for their equaliser, and some good linkup between Tom Collins and Dan Richardson, saw Richardson side foot bicycle kick the ball into the bottom corner for 2-2. Cliffe were firmly on top midway through the second half, but a sucker punch of a goal for 3-2, and then surely Marcia’s goal of the season – a high arc’ed volley from the right wing that hit the far top corner, bar and in for 4-2 took the wind out of Cliffe’s sails and killed the game. FT 4-2.
Callum Ransome earned deserved man-of-match award. 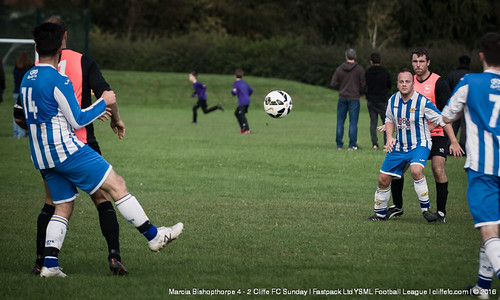